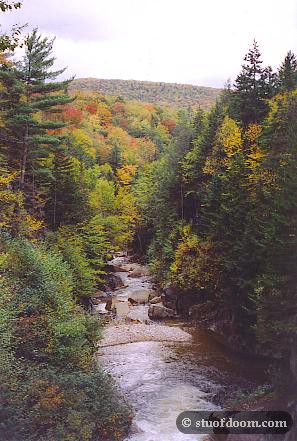 A view at The Flume

We got screwed on this trip. The weather really was against the entire Northeast this particular weekend. At least I finally got to visit Vermont – I had been to every other New England state, and even Quebec, but I always somehow managed to skip around Vermont. As such, it was supposed to be the centerpiece of this trip.

We had already reserved our campsites at 2 different places, one in VT and the other in NH. I worked til noon and left for Vermont around 1. It took about 7½ hours to get to our campsite, Lazy Lions (a very nice site, by the way); another half hour and we’d have been locked out. Putting a tent up with no light but your car’s headlights and a crappy lantern is an interesting experience.
We had intentionally picked Lazy Lions because it was minutes from our first official stop of the trip – Hope Cemetery in Barre. But first we went to see the “Whispering Statue”; it’s surrounded by a semi-circle wall and bench. Someone is supposed to sit across from you (the statue’s in the way so you can’t see them) and whisper. You’re supposed to be able to hear them. Well, either it was the traffic or we weren’t doing something right, but we couldn’t get the dumb statue to whisper.
We had some trouble finding the cemetery, mostly because I forgot the name of it (told you I don’t plan these things very thoroughly), but we finally managed. 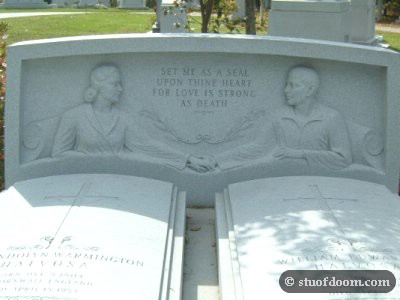 The stones at Hope were….wow. This place is right behind Sleepy Hollow on my list of favorite graveyards. It’s fairly big, so you could easily spend an hour or two there. If you look at the Hope page, you’ll notice the sky in many of the pictures is very dark – an omen for the rest of the trip.

I had read about a silly little place in northeastern Vermont – a chapel for dogs. It sounded so absurd that I had to visit. It was only about 45 minutes from where we were. We ventured to St. Johnsbury, or St. Jay’s as the locals allegedly call it, to check out this “Dog Chapel.” And what we saw was just that – on a mountainside was a small chapel with several dogs running around. The banisters and benches were also shaped like dogs. There were 2 normal doorways and a doggie door leading in. Inside was a statue of a dog with wings; the walls were covered with photos of people’s pets. Like most churches, this one had stained glass – with dogs. Next to the chapel was a gift shop. Dogs must be Catholic.

It would be a bit of a drive, but we wanted to go to New Hampshire next and go back to The Flume, which we hadn’t seen in 2 years. I wanted to get better photos of it, and we just plain loved the place. A few miles up the road from our goal, we found some ruins of an old iron forge – not overly impressive but still worthy of being included in the trip. When we neared The Flume, the roads were wet and the sky was practically black. We knew we had just missed some heavy rain, but it looked like it could start again at any moment. We were very lucky and had no rain the whole time there. 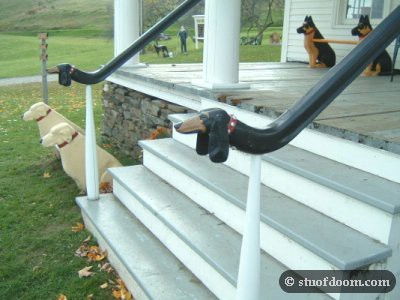 Stairs leading to the dog chapel.

We headed up to our campsite, which was literally minutes from Maine. I was planning to visit something small in Maine, but things wouldn’t turn out that way. We stayed at White Birches, and this time we actually got to the site BEFORE night. We didn’t feel like cooking at the campsite, so we went to a small place up the road, Mr. Pizza. The food was good and their White Mountain Mudslide kicked ass.
It began to rain a little bit. We had nothing else to do so we turned in early.
I awoke at 5 AM with water dripping on my head. The rain was now a downpour. Our tent had flooded and the sleeping bag was wet. We slept in the car for 4 hours. Around 9, it was still raining heavily, so we packed up camp and left. We only had 2 more stops to make – we wanted to revisit America’s Stonehenge and Salem.

We were hoping we’d drive through the rain by the time we got to Stonehenge. Well, we didn’t. But we stopped there anyway to buy a magnet. Yup, we went about an hour out of our way just to add to our magnet collection.

We reached Massachusetts. It was still raining. We knew we’d have to give up on Salem and decided to just head home.

It rained the entire drive home. Not once did it stop. All the way from northern New Hampshire to southern New Jersey. Route 93 to the Mass Pike to the NY Thruway to the Parkway to Route 9.
Rain.

Despite our time being cut in half by the weather, it was an alright trip. I think the first two were much better though.