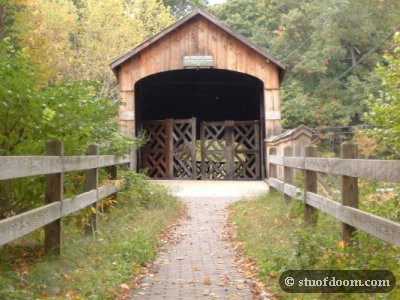 We headed up on a Friday night and stayed, coincidentally, in a town I used to live in (I lived in Branford for about a year when I was 4). Our first stop of the trip was about an hour away – Gillette Castle. We woke up pretty early and headed there. I had no knowledge of the place other than it was a castle. I found out while there that it was the home of the guy who played Sherlock Holmes on TV. It was a very unique house, but I really wish we were told before we went in that there was no flash photography allowed and that once you go upstairs you can’t go back downstairs.
I found out about the castle from a decade-old tourism pamphlet. It also mentioned a ghost town nearby. I couldn’t find any information about it, so I asked some of the people at the park. They directed me to…..I don’t know where, but it wasn’t what I saw in the pamphlet. We followed their directions and got lost…..but in doing so we stumbled upon Comstock Covered Bridge. On the way back we found what looked like a ghost town, but there were several NO TRESPASSING signs everywhere. There was also nowhere to park. I couldn’t walk around the place, and I didn’t want to get pictures from the roadside in the car, so we just passed on by. 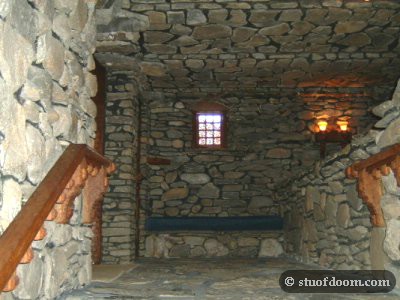 We next drove to Rhode Island. We had 2 planned stops there, the first being the grave of Mercy Brown. I’d read about it several times before and wanted to see it for myself. Nobody else was at the cemetery when we visited, which was good for me because I feel odd when people are around me when I’m photographing grave stones. Someone had placed an apple and a gourd on Mercy’s stone. It spooked us a bit that a nearby grave had sunken.
Our second stop was supposed to have been an abandoned building shaped like a jug of milk, but it was too far from where we were and it wasn’t all that interesting anyway. The map showed that we were near the tomb of an Indian chief – I forget the name. We drove to the very end of the road and found nothing. We really had nothing else to do, so we headed to Mystic to go to the aquarium. I wanted to check out the port at Mystic, since I hadn’t been there in about 20 years, but just about everything was closed. We poked around some small shops not far from the aquarium, and that was about it. Our next goals were back on the other side of the state, so we headed back to Branford and stayed in the same place again. While in Branford, we saw Shaun of the Dead, which is probably why I’ll never forget this trip. Screw all the places I went to; that movie ruled. I still can’t believe the ticket girl asked me for ID. 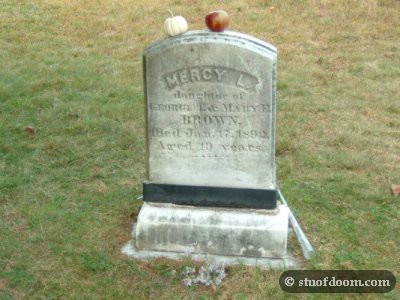 The next day we headed up to Waterbury to visit a mountaintop curiosity – Holy Land. The place was nuts, but then again most places that I’ve gone to dealing with religion are. This was a sort of outside museum/park showing different stories from the Bible. Abandoned for quite some time now, the displays are crumbling, and most of the statues are headless. We noticed on one rock a pile of half-charred Jehovah’s Witness pamphlets. 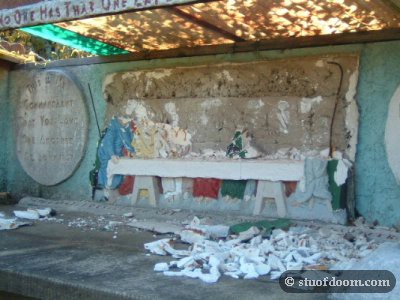 What’s left of the Last Supper at Holy Land.

Last goal of the day was the infamous ghost town of Dudleytown, way up in Cornwall. I had absolutely no directions or information about the place, except that it was “near the intersection of Routes 4 & 7.” This hint proved to be useless. We had nothing else to do, so we drove around Cornwall and West Cornwall a bit. If I were to ever move to New England, it would be around there.

That was about it for us. We headed home.