For most of my life, Seaside Heights was just a 3 mile drive away.  Having lived by the boardwalk my whole life, I never understood the big deal about it.  As a kid, it was a fun place.  As a teen and young adult, it was still a nice place to walk around, but it sure did make traffic suck in the summertime with all the North Jerseyans, New Yorkers, and Pennsylvanians swarming the area.

For those not in the know, to residents of The Shore and South Jersey, North Jersey and New York tourists are “bennies” and PA ones, particularly from Philly, are “shoobies.”  I could go deeper into the origins of these but I really don’t feel like it.  Look it up.

Anyway, from my experience, most people out of state think boardwalk towns are booming year round and always have something going on.

The towns, and boardwalks especially, are just about ghost towns for most of the year.  Summer season is only Memorial Day weekend til Labor Day, less than 5 months.

So to prove my point, I went to Seaside on May 7, less than 3 weeks before “the season” and took pics of the boardwalk.  I wanted to show that even the more popular shore destinations look about the same as Asbury Park for most of the year.  This also served as a nice blast of nostalgia, since Seaside is no longer a quick drive for me but now over 100 miles away.

And as for the benny/shoobie thing, I for one never saw the big deal.  Sure, they add to the traffic of an already overpopulated area, and sure some are very, very obnoxious.  But if it weren’t for them, shore towns would have next to no economy and probably wouldn’t exist.  Take the bad with the good and shut up already.  Funny part is most of the “shore people” I know moved there from North Jersey or NY and really have no room to talk.

…and I guess technically I’m a shoobie now, but I still don’t appreciate getting grief for going back to where I grew up and lived for 25 years.

…oh yeah, pictures.  I started at the landmark Midway Steakhouse and first headed north.  Coin Castle, one of the big 2 arcades, was completely closed up.  This used to be my favorite arcade when I was a kid, but then they got rid of like 90% of their arcade games and replaced them with all that crap that gives out points and tokens.  I switched teams and began to frequent Lucky Leo’s. 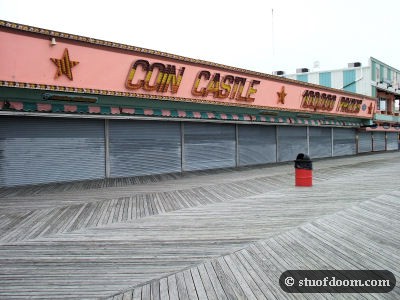 Up the boardwalk a bit is Casino Pier, which is always closed in the off-season.  Nearly every shop and stand was closed as well. 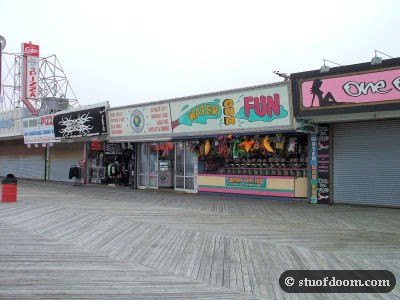 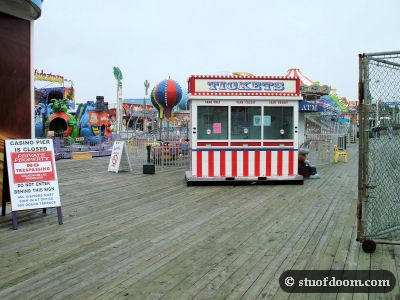 Once you get past Casino Pier, the north end gets pretty boring.  There are sky swings that run down to the end of the boardwalk; that’s the only ride up this way.  Many of the arcades and stores down this way are much smaller and less visited than those at the southern end.  Pleasure Island, a pretty run down but still decent arcade, was up this way but shut down a few years ago. 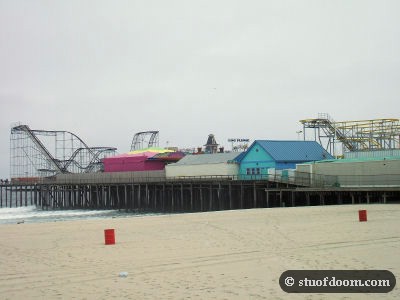 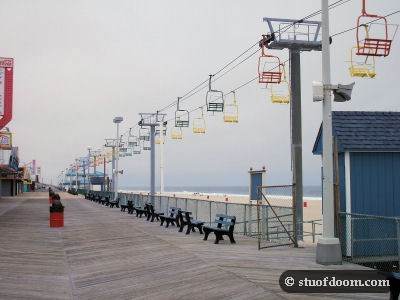 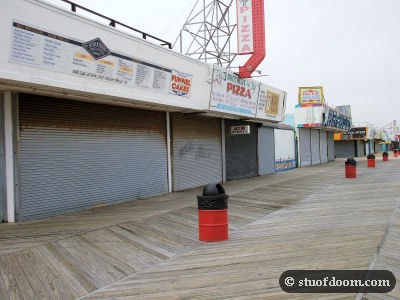 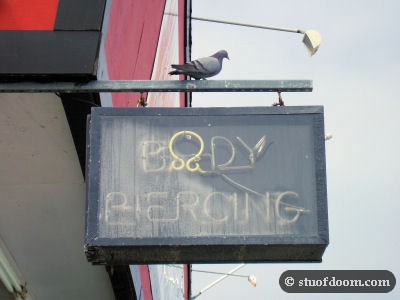 At the very end is…nothing.  Always wished they put something here. 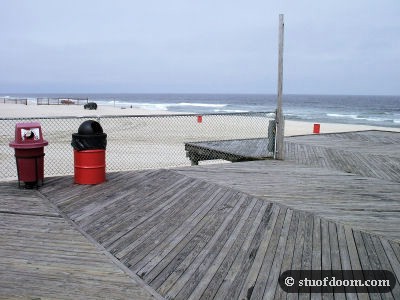 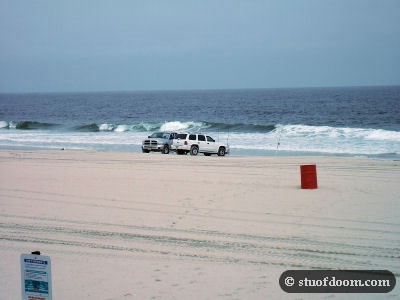 Told ya they hate bennies.

I headed back south.  Down this way are many more arcades and stores.  There’s also a second amusement pier, Funtown Pier.  This one’s more geared toward little kids.  It’s also completely off limits in the off-season. 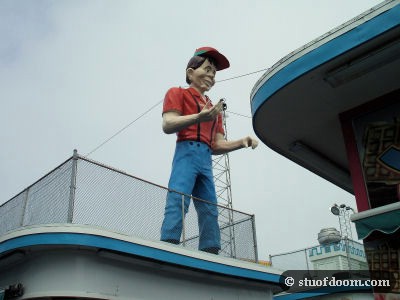 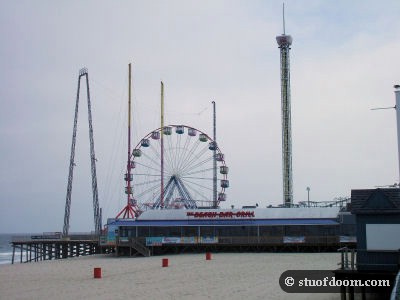 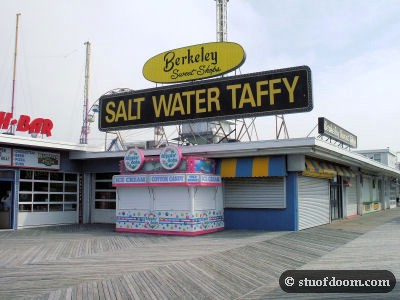 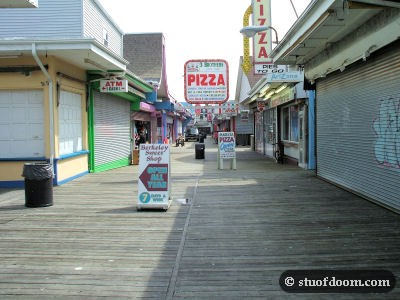 Down near the very end is the Saw Mill, a very popular pizzeria and bar.  When I visited was just a few weeks after the Saw Mill’s inside caught fire.  It was being fixed up and the air still smelled like burnt wood.  I’m glad they got to it before the whole place went up. 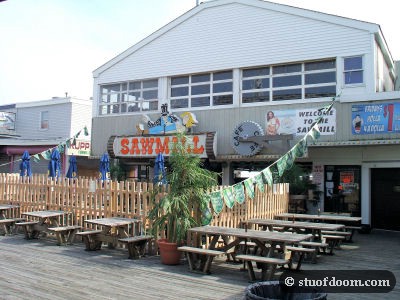 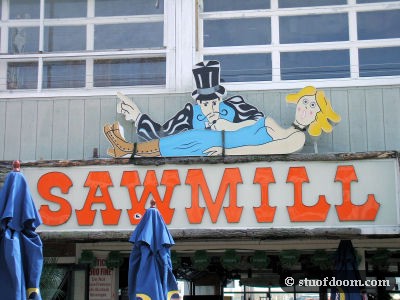 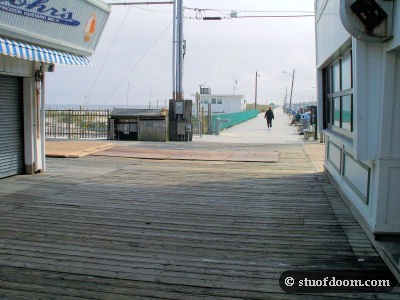 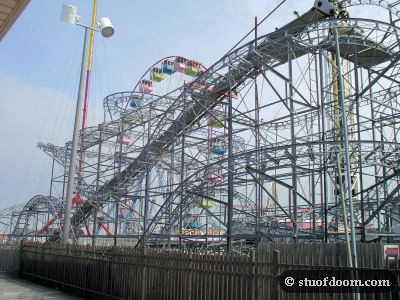 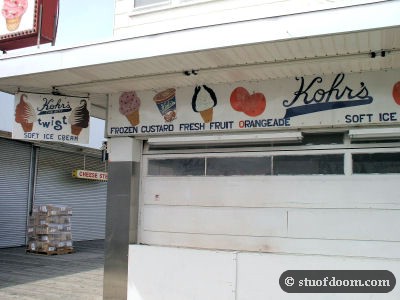 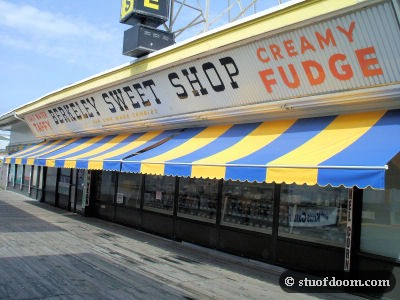 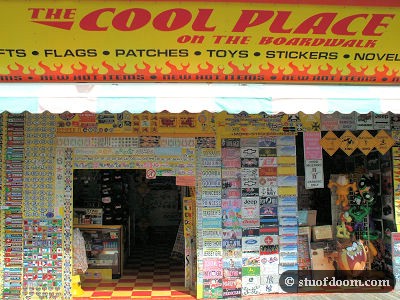 Stores like this aggravate me.  Anyone who buys anything from this place is a tool.  And probably a benny. 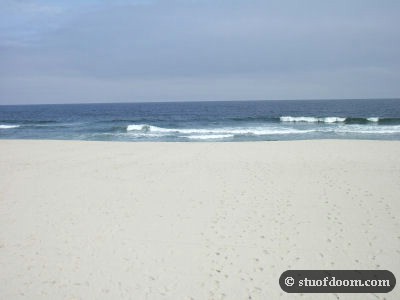 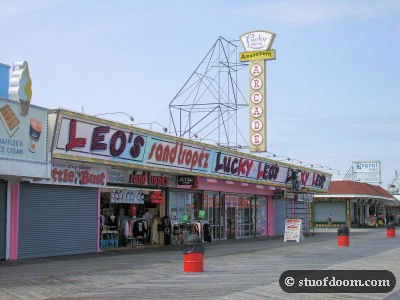 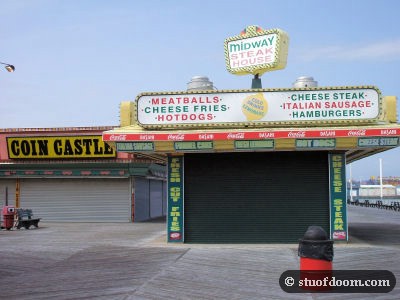 Back where I started.  Time to go. 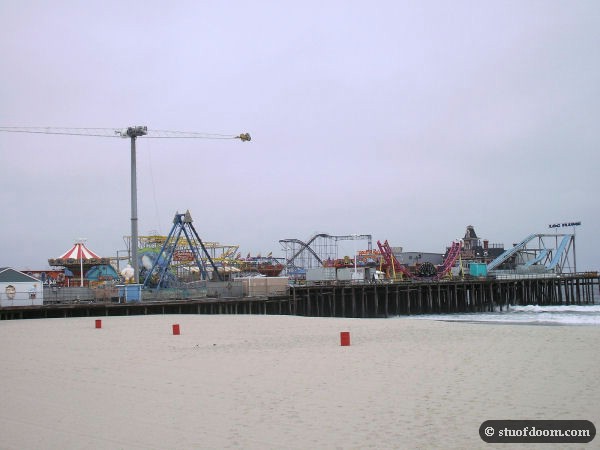