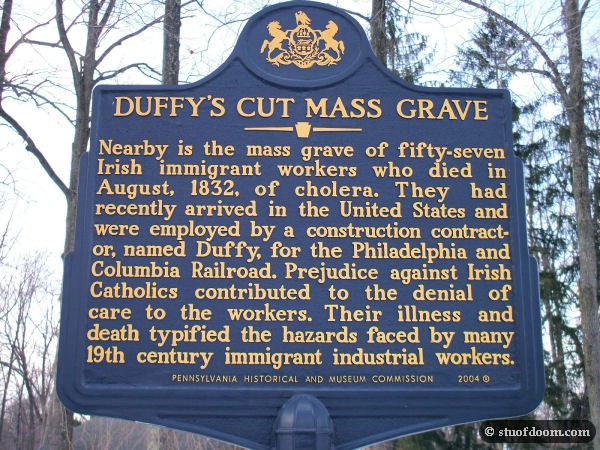 In the summer of 1832, Philip Duffy, a railroad contractor, hired 57 Irish immigrants on the docks of Philadelphia.  They were to fill in a ravine near present-day Malvern so rails for a new track could be laid.  They began their task, but only 6 weeks later all 57 were dead.  History blames a cholera outbreak, but cholera generally only has a 50% death rate.  Local legend claims that some, if not all, were murdered.  The locals at the time had a high prejudice of Catholicism and of immigrants.

Whatever happened to them, they were quickly buried in a shallow ditch with no ceremony.  In the 1870’s, a small fence was set up around what people thought was the mass grave site; it turned out to be the wrong spot.  By the 1910’s, it was discovered that at least part of the grave was now under the tracks; some time prior, the railroad had the track reset.  Papers reporting the deaths of the workers were found in the 1970’s, hidden in a vault.  The events at Duffy’s Cut were almost completely lost to history.  The area didn’t even get a historical marker until 2004.

The marker is at the intersection of King and Sugartown.  A few blocks away is the mass grave, which is currently being examined by archaeologists. 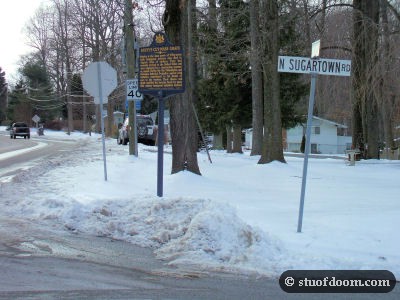