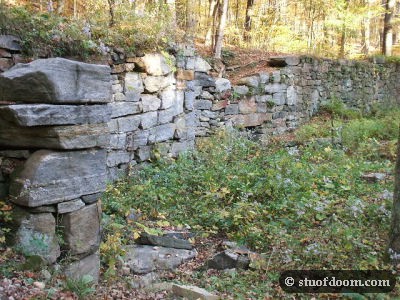 This trip took a complete 180 the day before we left. I originally planned to do some stuff in Connecticut, then head up to Vermont, and finally end in Salem. In a last minute decision, I figured driving to the top of Vermont would seriously hinder our time and would cost more than I was willing to spend. So we scrapped the things we were going to see in Vermont and looked up places closer to our area of focus.

We were bad and decided to call out of work so we could leave earlier. Other than the typical traffic in NYC and the delays on I-95 in Connecticut, the drive up was alright.

Our first stop of the trip was a ghost town in Connecticut named Gay City. The jokes didn’t stop with this one. I didn’t know much about the town beforehand, and I do have to say I was expecting more. Just your average cellar holes, random stone walls, and mill foundations. One website claimed a graveyard was there, but we couldn’t find it.
We ate at a place called Family Pizza (I’m not sure what town it was in), and they had some oddball stuff there. We got the chicken taco pizza, and it was one of the greatest things I’ve ever had. I’d drive up there again just to eat at that place.
We ended up camping at Lake Williams Campground, and I have to say this is one of our worst camping experiences yet. The site we were given was surrounded on all sides by trailers. Around 1 AM, someone came home (they live in the campground) and was yelling, coughing, etc…then they let their 2 rottweilers out. Then the people on the one side of us came home about 20 minutes later, and they were just as loud…and also had 2 dogs. People a bit up the road were also yelling, speeding through the campground, and peeling their tires out. To make everything even worse, the dead end road we were off had some sort of street light at the end, illuminating our tent all night.
It was awful.
The only good thing I’ll say about this campsite is that there are no fire regulations (no set time to have campfires out).

Anyway, morning came and we hightailed it out of there and headed to Rhode Island. Since Mercy Brown‘s grave was only 10 minutes from our next destination, I decided to swing by there. I was sad to see someone has carved several X’s into her stone since my last visit. 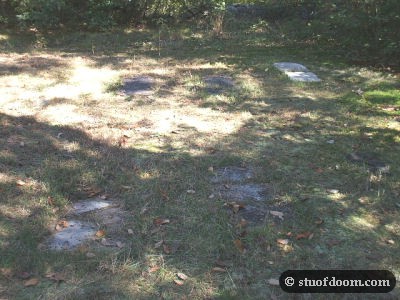 Abandoned cemetery with most of the stones flat on the ground.

The next place, like Gay City, I knew little about. A few websites made it sound like it was a ghost town. All I knew was that it was in or near West Warwick, there was an abandoned cemetery there, and there may or may not be factory ruins. I didn’t even have a name of the place – just coordinates.
We arrived and saw we had to cross a bridge and then hike down a steep hill to get to the graves. Stone walls surrounded the cemetery, and most stones were broken and flat on the ground or just worn down stumps a few inches high. We found no ruins of any kind other than the nearby stone walls. One side of the river was completely blocked off with barbed wire.

A little disappointed, I decided to try and cram the Lizzie Borden House into the day, since it was pretty far from our other stops in Massachusetts. I tried to include the house on previous trips, but we were never close enough to do so. I knew the last tour was at 3 PM, and it was already after 1. We had to make it from the top of Rhode Island to Fall River, MA in about 90 minutes. I also had no idea just where the house was. I had the address, but that does little good in a town I’ve never been to before.
We drove along the water and decided to cross the Narragansett Bay to get to MA. We knew we’d have to cross several bridges to get there. It was the first week of October, so I figured that, much like the shore back home, it’d be dead and we’d have no traffic.
Nope.
There was so much traffic, we didn’t get out of Rhode Island until about 2:40. We had 20 minutes to get to Fall River and find the house. Since it was on 2nd Street, I figured we’d see it driving down the main road. Can’t really miss numbered streets.
Nope.

I had to stop at a gas station. The kid said we were just a few blocks from it.
It was now 5 minutes til 3.
Well, in epic movie tradition, we got there exactly at 3 and were just in time. We were also lucky because the previous tour had run a few minutes late. We lucked out even further and were the only ones on the tour. It costs $10 per person and lasts anywhere between a half hour to an hour, depending on the size of the group. Afterward, we went to the nearby cemetery and visited the Borden family plot. I found it funny Lizzie is buried with her parents. 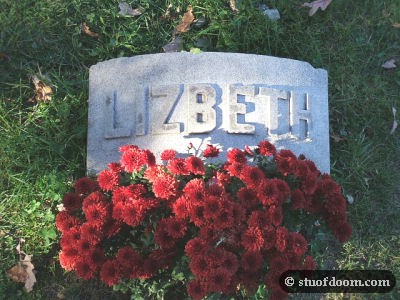 Massachusetts doesn’t have very many campgrounds, at least not the eastern half. We searched online for a good hour or so and couldn’t find one (well, we did find one, but they wanted fires out by 10 PM so we said screw ’em). It was pretty late at this point, and we ultimately ended up staying at a hotel in Salem, NH – a town we almost always end up going to on our trips. Maybe it’s a sign. 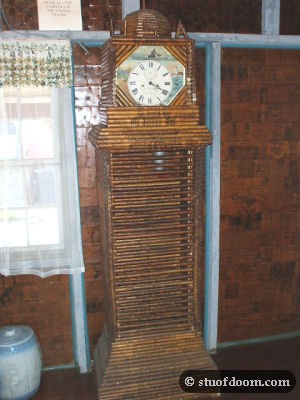 Clock made out of newspaper at The Paper House.

The next day we headed to Rockport, MA, to visit a silly attraction – a house with its walls, fireplace, and furniture made out of newspaper. It was a pain to find, since the signs in Rockport are near-unnavigable. It was hokey, as I was expecting it to be – but I saw it, darn it. And that’s all that matters.
The entire area was just nice – very picturesque – never seen a place like it before. Too bad it’s for rich people.

Our final stop was a place we hadn’t been to in 3 years – Salem. I know it’s touristy, I know the witch stuff is all mostly nonsense, but there’s something about the town. The museums, the old cemeteries, the tons of stores – it’s just nice to walk around. This time around, they were doing heavy road work, so we ended up parking pretty far away – but at least it was free. 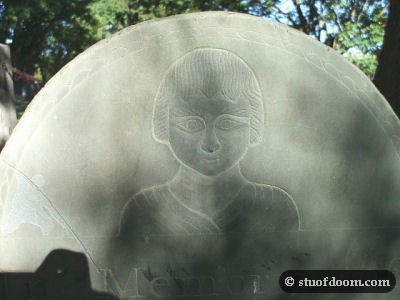 A creepy headstone in Old Burying Point that I somehow missed my first visit.

I was a bit upset to see the place has been dumbed down even more; there were a lot more people this time around as well. The Old Burying Point graveyard now has nighttime candle tours, and the alley in front of it was lined with hot dog and kettle corn stands. It’s not a county fair, people – it’s a cemetery. The small mall in the town center had a ‘psychic fair’ going on. Overall, the place has just become far more tourist friendly (aka adding more stupid stuff to part stupid people with their money). I don’t know if I’ll be going back anytime soon.

And that was that. We were going to camp over another night, but we decided to save some money and chose to just drive home.
Perhaps someday I’ll start planning these things in advance. Or at least where we’ll be staying.