Blast furnace at the ghost town of Tahawus.

For quite some time I wanted to visit a ghost town in the Adirondacks – Tahawus or Adirondak, depending on who you talked to. Rory, who used to run a now-defunct exploring website, also mentioned a few times he wanted to plan a camping trip to the Adirondacks, with the town being the central focus of it. Well, one day he finally picked a weekend near the end of August. Four of us headed up around 8 AM, and we got there a bit after 2. Our campsite was at Lewey Lake, and it was like its own little paradise. We had to walk down a small hillside path to get to the site, and a stream ran behind it.

I had coordinates for an abandoned cemetery, Hoffman Cemetery. It was a 30-40 minute drive from the campsite to the parking coordinates. From there, we hiked about 10 minutes into the woods to get to this sign:

Also on the way was a wooden bridge, with some of its planks missing.
The cemetery has started to become overgrown. Several of the people interred there were Civil War veterans. A few enormous trees stand guard in the middle.

It was already pretty late into the day when we got back to our cars. We hightailed it to our main goal, Tahawus. That would be about another hour drive. 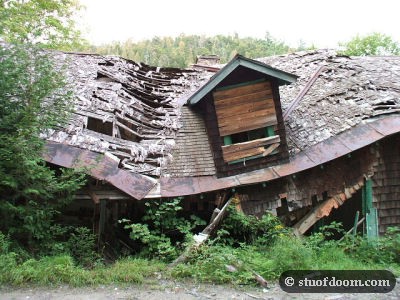 I was amazed to see a ghost town with buildings still standing; I was so used to the Pines towns with nothing but foundations. The town is pretty much in the middle of nowhere, which is a good thing; there was absolutely no vandalism. None of the houses were safe to enter; all had weak or rotting floors. We noticed some houses were on the other side of the Hudson River, so we walked across it. Well, I initially leapfrogged across, but I walked across on the way back. Rory, after falling on his ass in the water, said screw it, stripped, and took a bath in the river.

We didn’t get back to the campsite until 10:30 or so. The weather began to turn on us. It drizzled, making getting a fire going difficult. We actually turned in pretty early, which is unusual for me. I guess a 6 hour drive, driving all over the place in the mountains, and 2 hikes will do that to you.

The rain began around 6. We learned our new tent had a few small leaks in it, but they weren’t as bad as our tent from the previous New England trip. Luckily, the rain let up just long enough for us to pack up camp. We were supposed to go on a rock climb Rory had planned out, but the rain picked up again, ending our trip a few hours early.

The drive back sucked. It took 7 or 8 hours to get home because traffic would move, then get bumper to bumper for 20 minutes, then pick back up, then stop again, etc., etc., etc……….