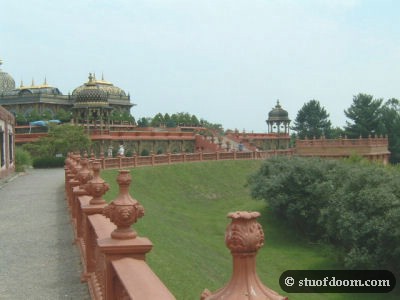 I was going to a family reunion at my aunt’s in Indiana. I’d been out there a few times but always drove with my mom, so I never got the opportunity to go off on my own. Since we’d just bought a new car with kickass gas mileage (40 MPG), Annie and I decided to drive out ourselves this time. Due to work we only had a few days to play with, but I figured I could make a mini road trip out of it. Unfortunately, this was also the same week as the nationwide heat wave.

We headed out at 1 AM and got about an 2 hours into Pennsylvania. We stopped off at a rest stop and attempted to sleep. The combination of horribly high humidity and 18-wheelers turning in every few minutes resulted in maybe 2 hours of sleep. On a brighter note, half a tank of gas got us from the Jersey shore all the way to Altoona.

Our first goal was the Palace of Gold in West Virginia. I didn’t know much about it beforehand other than it looked pretty cool. The palace itself is dedicated to Srila Prabhupada, who helped bring Hinduism to the West. Not something you’d expect to find in the mountains of West Virginia. It’s free to walk the grounds and visit the temple, but to tour the palace itself is $6. The tour lasts 20-30 minutes, depending on how many bad jokes the guide tells.

It wasn’t in our original itinerary, but we found out West Virginia Penitentiary was nearby, so that became stop #2. It wasn’t what I was expecting; maybe I’ve been spoiled by Eastern State in Philly, but overall I thought WV was pretty boring. It’s also only group tours, and I can’t stand group tours. It’s very annoying trying to get good pictures with a bunch of people in my way. Overall it was worth the $8.
Fair warning – only the first room is air conditioned. Walking down cell blocks in 90+ degree heat is not fun. 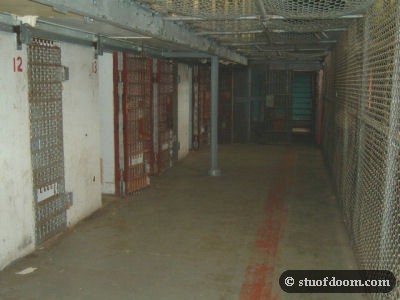 There were a few small places in Ohio we had planned to visit – just silly roadside things like bushes cut to look like people and some guy’s yard filled with small buildings he built out of pebbles – but daylight was running a little short, and we just didn’t have enough interest to try and find them. I was very, very lucky to find an old and somewhat secret cemetery though. Before the trip, I wrote down a few highway geocaches to visit; the one I picked in Ohio just happened to be up the road from Knob Prairie Cemetery – which oddly enough is behind a corporate office. There was also a list of rules you had to follow, otherwise you were considered to be trespassing. According to the sign, you could only visit on weekends or holidays. Guess we were trespassing then. Oh well. 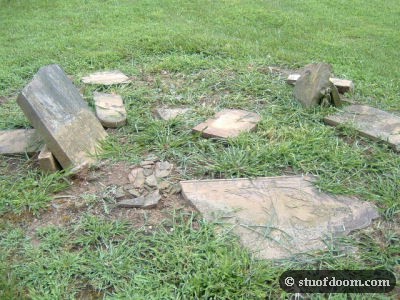 Many of the stones at Knob Prairie are in very sad shape…but at least the grass gets cut!

We finally got to my grandpa’s house a bit before midnight. The next day we didn’t do very much except go to Nashville, IN and shop. I bought yet another dagger – a Scottish dirk. There’s a place not far from Nashville that I’ve been wanting to find for years, but it’s about a mile walk into the woods to get to it. The heatwave stopped us this time, and I’m pretty sure the path would have been overgrown like it was last time. I’ll have to try again in the fall or winter.
The day after we went to find our next goal – pyramid ruins in the town of Needmore. A 1:5 scale replica of the Great Pyramid, along with a section of the Great Wall were to have been part of a planned development in the 1950’s. Well, the funding seized, and the partially built pyramid has sat at the end of Old Highway 37 ever since. From the looks of it, not much was finished, and the whole area is becoming reclaimed by nature. Trees are growing out of the “pyramid” now. 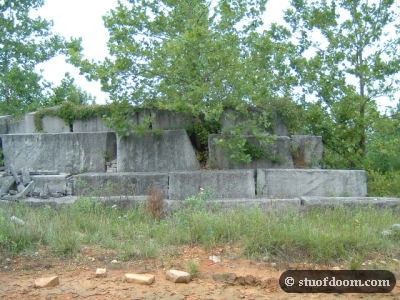 Looks more like hanging gardens than a pyramid now.

Not far from Needmore is Bedford, where our next place, Bluespring Caverns, was. I had been to Bluespring 5 years earlier but never paid attention to where it was. I was surprised to find out it was pretty close to my family’s section of the state.
Bluespring Caverns were the first caverns I’d ever visited, as well as the only ones I know of where the entire tour is by boat. The tour is about an hour and cost us $12 each. 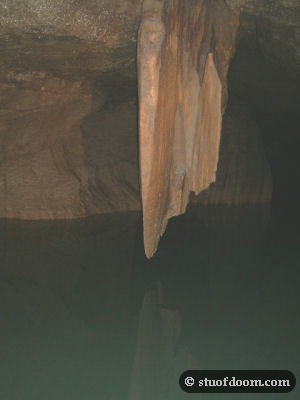 That would be our last stop for this trip. The last few days would be spent stealing internet connections with Annie’s laptop and hiding in the corner at the family reunion. Oh yeah, I also went to my first drive-in theater – Cinema 67 – and saw a double feature of Click and Pirates 2. Two large thunderstorms passed over while we were there; the lightning lit up the entire sky quite a few times. $6 for 2 movies while being out in 2 storms of doom? What a deal! Sure beats the $8.50 I spend in NJ for one movie, a sticky seat, and a scratched up screen.
There was actually one last stop we were supposed to have made in Ohio – at a castle. But we found out the castle opened at 11 AM, and we’d be a good 2 hours past it by then. Maybe next time.