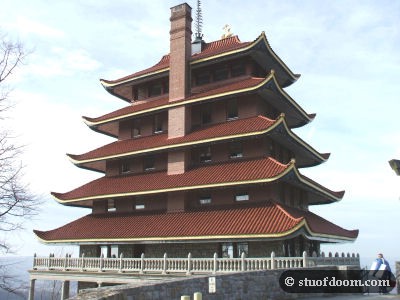 The Pagoda in Reading.

I had just received a decent-sized check from Geico after cancelling my policy with them. We also had a few extra days off from work because of New Year’s. Free money + extra time = trip. We chose eastern PA because there were a few things I had been meaning to see, some for years. Plus I wanted to return to Centralia since my first visit in ’03. Plus we’ve been interested in moving to the Pocono area for some time and wanted to scope out some different towns than the ones we were already looking into.

I was always interested in seeing the pagoda in Reading but never got around to it. I decided to make that the first stop of the trip. We left around 6 and got to Reading probably a bit before 9. I actually attempted to somewhat plan this trip out before we left. I looked up hotels and rates in Reading. According to one website, the Econo Lodge in Reading was only $53 a night. When we arrived, however, I was informed the cheapest room was about 80 bucks. I laughed and walked out. Another nearby hotel wanted $88. I still would like to know why the website had rates for all the hotels in the $50-60 range.
We drove to another nearby town, Temple, and found a motel there. They wanted $65, which at that point I gladly accepted. We were on the way to our room when some dude appeared out of the shadows and tried to bum cigarettes off us. Creeped out a bit, we got in the room, and I quickly learned why this place was so much cheaper than the others – because it sucked. Very much so. This was easily the second worst motel I’ve ever stayed at, and the only reason I say second worst is because there was no writing on the wall. Actually, scratch that…this was the worst, because the one with the writing on the wall didn’t have a train track running behind it. That’s right, we had no idea a major rail line ran just behind the motel, so every half hour or so a train would speed by, horn blaring. The smoke alarm in our room, and I suspect others, was ripped out of the ceiling; in its place was a tissue. There were no controls for the heat, which sucked because it was baseboard, so on top of of trains, we got loud rushing water all night.
We got hungry and decided to get some food in town. After getting some Arby’s, we decided to go to the 24 hour grocery store to get some drinks and snacks for the trip. Upon reaching the register, I saw a bunch of beef jerky. One bag stuck out from the rest….because the jerky was white. I had never seen white jerky before, so I picked it up and examined it….only to find out it was white because it was welllllll past expiration. Crap was growing on it. So I picked up a different brand and left. Getting back to the room, we noticed this bag was expired by a month. I probably could’ve reported that store for selling ass-old jerky. I can’t remember the name though. Oh yeah, on the way out, I saw a flyer on the wall. It had a picture of a dude and it said in really big letters “DO YOU KNOW WHO KILLED ME?” What the hell? Turns out he was murdered nearby not too long ago. Next to him were a ton of pictures of other people who had been killed nearby as well. What a scary area. We left the scary store selling expired food to head back to our scary motel room with scary people hiding in the shadows and maybe slept 2 hours due to the combination of trains, the heating system we had no control over, and just plain fear of our car getting stolen or our room broken into and us getting killed. Or a fire burning the place down because our tissue of a smoke alarm wouldn’t save us.
The only reason I’m not providing the name of the motel is because the lady didn’t charge me tax. Just…don’t stay in Temple.

Did you really read all that? Wow. Anyway, we woke up and headed to the pagoda so we could get out of the area as soon as possible. I was hoping the pagoda would be open. In fact, I purposely picked this particular day because according to the 3 different sets of hours I found on the web, they would be. Well, they were open….just not when I showed up. They opened at noon that day. I was annoyed because I wasn’t waiting around 2 hours. I took my damn photos and left. 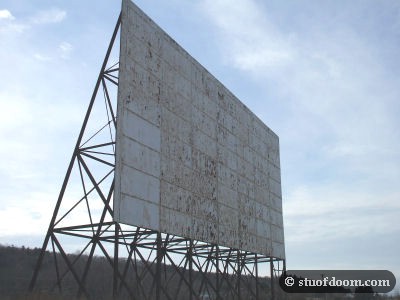 Next up was Centralia, sort of the focal point of the entire trip. I lucked out because the road that leads to Centralia also goes right through Reading and Temple, so it was a nice, straight drive up. Annie pointed out an abandoned drive-in on the side of the road, so we quickly romped around and got some pics.

Centralia was pretty much the same Centralia I saw 3½ years prior, except the abandoned highway leading to it was in slightly worse shape. The road is bubbling and cracking more. Not very much anyone can do about it though. The town itself seemed to have fewer smoke vents. I remember the main cemetery had smoke coming out of it my first trip; this time I saw none around it. I also noticed a lot of people checking out the town this time around; I guess it’s become more well known.
Centralia is still one of my favorite places I’ve visited; nothing else is like it. 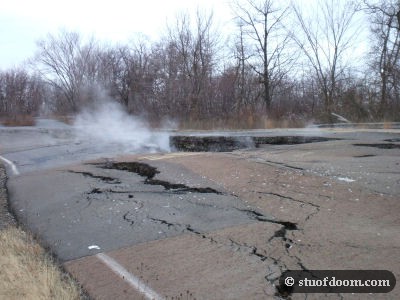 We didn’t have anything else planned for the day, so we decided to start heading east again, toward our goal for the next day – Columcille. We ended up staying at The Blakeslee Inn – a very nice place, I may add. I will certainly keep it in mind for future trips. We had dinner at the Blakeslee Diner, which was pretty good. Then we did the whole celebrating New Year’s stuff.
Blakeslee overall was very pleasant. It’s been added to our list of towns we’d move to.

After a much more restful night than the previous, we awoke to find the weather had turned on us. It was raining but not too badly. We decided to continue on with our trip. Columcille wasn’t too far away. I wasn’t quite sure what to expect; I only knew there was Stonehenge-type stuff there. 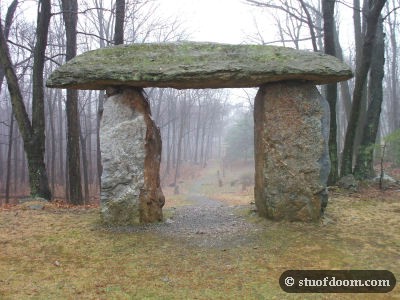 The rain had let up and was just drizzling when we arrived, which would give me a cool hazy effect in some photos. I was surprised at the size of Columcille and that there was quite a bit to see. I had no idea the place had a chapel, for instance. It’s a very chill place overall. If you’re into the whole Celtic/New Agey thing or just like megaliths, it’s worth a visit. It’s free to visit but donations help keep it running.

That was pretty much it for this semi-vacation. We considered checking out the Manunka Chunk tunnels across the river in Jersey, but we had read they flood easily and figured they’d be flooded at that point in time. So we stopped at the Mt. Bethel Diner (pretty good diner, I dug it) and just headed home. We would not get to Manunka Chunk until a few weeks after the trip.