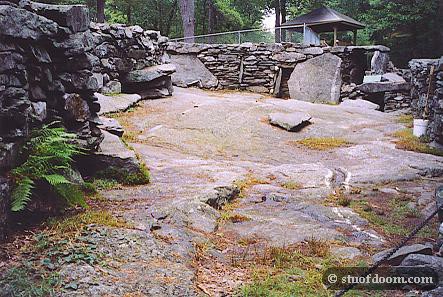 This will always be one of my most memorable trips. It was the first time I went off on my own – no family, no school trips – just me & my (at the time) good friend Annie. It was also one of the first weekends we ever spent alone, and while we weren’t together yet, I think this trip helped lead to it. There were originally supposed to have been 4 of us, but the other 2 couldn’t go for whatever reason. I’m glad.

I really didn’t know where to go, but some friends had recently gone to Salem, and my dad also said I’d like Salem. So that was first on the list. I was poking around on New England maps, and I saw Salem in New Hampshire wasn’t too far from Salem in Massachusetts. I remembered seeing on History’s Mysteries something about a Stonehenge in Salem, NH, so I figured I’d give that a shot as well. I briefly toyed with the idea of going to Danvers, but some other sites had just gotten in trouble for going there, so I figured I would stay away from that. I figured the 2 places I had would be enough for a short weekend trip and that I’d probably find more stuff on my own.

I learned to never leave on a Friday night to go to New England – the exit ramp to get from the Turnpike to NYC is horrible. The GW Bridge itself is also pretty bad. It took us about 6 hours to get to Salem (MA). We knew hotel prices would be absurd there, so we made the trek up to the other Salem (NH) and stayed at the Park View Inn. We could’ve lived in our room.

There was a little drizzle in the morning, but it cleared up a bit when we got to the Stonehenge. The place was smaller than I thought, and we only spent a bit over an hour there; I had to figure out something else to do. My friends who suggested Salem to me had also mentioned another place, but I couldn’t remember the name. Scanning the map of NH we had, I saw the name and remembered – they told me to check out The Flume. We had about a 2 hour drive ahead of us, and we knew The Flume would be closing early that day, so we had to haul. We were lucky and made it about a half hour before they stopped letting people onto the buses.
The Flume was unlike anything I’d ever seen. The walk is somewhat long but very scenic. I don’t know how to describe the place in words. This is also where I saw my first 2 covered bridges. We decided to stay at the Park View again, but on the way back down, I introduced Annie to the wonderful world of Cracker Barrel. 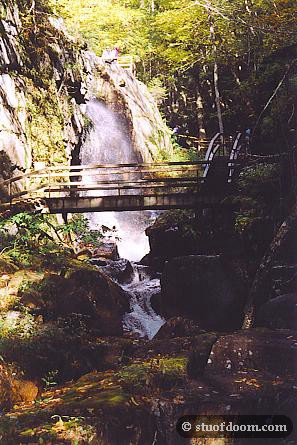 Bridge crossing over The Flume

We left pretty early and headed down to Salem, MA. We would spend the entire day there. First we did all the touristy stuff – the pirate museum, witch museums, and some crappy 3D thing called “Terror on the Wharf” or something. One of the museums did a reenactment of the witch trials. One actress was named Elizabeth, and if there really is such a thing as love at first sight, it happened to me in that museum. I talked about her for quite some time after that. Annie hated me for a while.
After wasting money in a 3D horror house which lasted maybe 3 minutes, we decided to start looking for “site worthy” stuff. All Salem had was old cemeteries, one of which had pilgrims and people from the witch trials in it. I wanted to get a photo of the place where the gallows were, but we had 2 different museums tell us 3 different locations, so I scrapped the idea. We first went to Old Burying Point, the older of the 2, and then to Howard Street. We wanted to go on the ghost walk, which wasn’t until 8 or 9 PM, I forget which. So we spent the rest of the day going in the shops and just hanging out. I considered going to the pirate museum again because pirates rule.
There were ads for 3 different ghost walks; the one we went on was for Spellbound Tours. The woman who led it said hers was the original and the others copied off her. She also had an album of pictures she claimed were from her walks. I took pics at all the “hot spots”, including an abandoned prison. Didn’t get anything, not even stupid orbs. 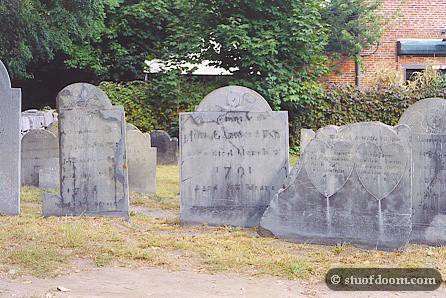 We left Salem around 10 at night. Figuring we could save some money, we drove straight home instead of staying over again. We got in around 4 in the morning. It was a tough drive home but I managed.

We liked the trip so much that we decided to go to New England one weekend every October.