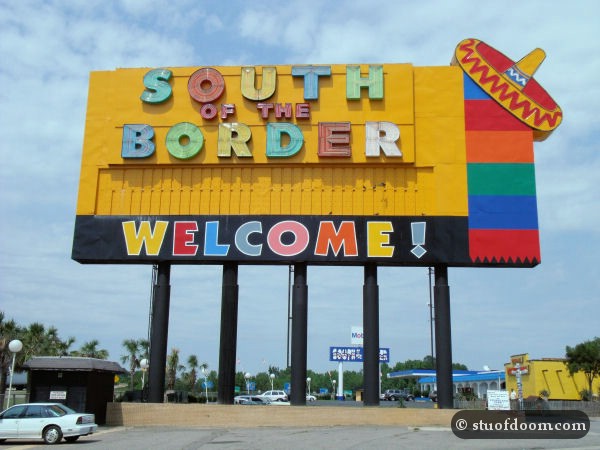 For a few years during my childhood, my family would drive down to Florida every February, and my brother and I always anticipated the stop at South of the Border.  If you have never heard of South of the Border, then you haven’t done much driving on I-95.  This roadside oddity, literally just south of the NC/SC border, is a Mexican themed, well, tourist trap, complete with its own motel, multiple gift shops, arcade, and restaurant.  For decades, it was a must-see spot for folks driving to DC or Disney, though it seems we’re hard-pressed to figure out why.  At the time, signs for it would pop up hundreds of miles away; I believe when I was younger they began showing up in northern Virginia, heading southbound anyway.  To be honest, I don’t have much memory of just why I liked stopping at the place.  There were big statues of animals and Pedro, the place’s mascot.  Sure, there were fireworks, but even at that young age I knew cheaper fireworks could be found elsewhere.  I remember my parents saying even back then, “This place is stupid.”  I’m pretty sure they only stopped there to shut the kiddies up. 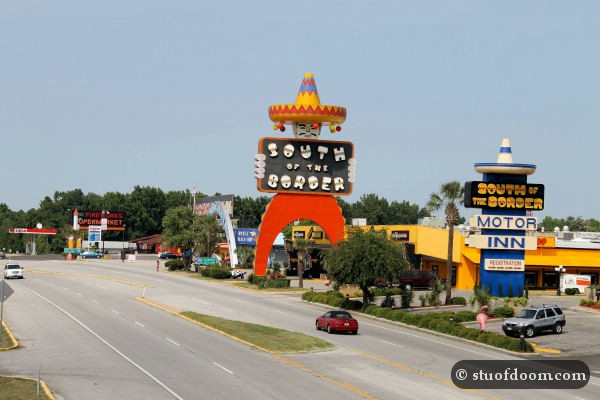 Fast forward about 20 years.  Since my wife and I have been vacationing in coastal North Carolina for the past few years, I wanted to make a day trip out of SotB, since I hadn’t been there in nearly 2 decades.  At first she was hesitant, but then when I mentioned a bomb crater would be included in the day’s itinerary, she agreed.  So off we went, to see if my childhood memories were accurate, or if SotB was indeed “stupid.”  Was there more to this place than gift shops and kitsch statues?  Hearing many people say the place had gone downhill in recent years added to my curiosity.  The dwindling number of signs along I-95 and their ever-shrinking radius seemed to reflect this idea; I believe the first southbound SotB sign now appears somewhere in the middle or bottom of NC as opposed to northern Virginia 20 years ago. 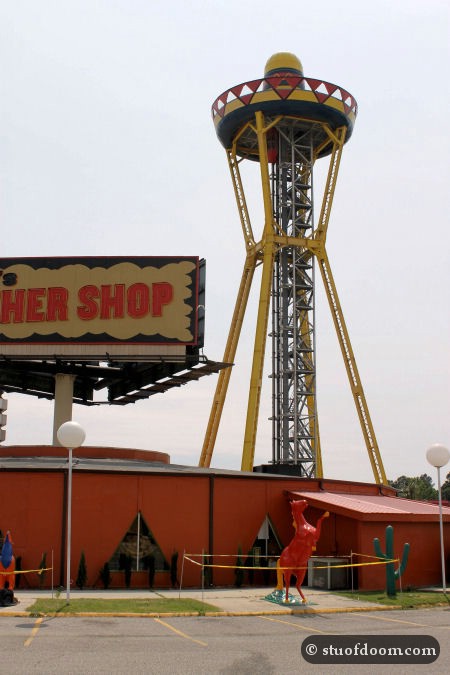 The 200′ Sombrero Tower is very noticeable from I-95.  Upon pulling in, however, we learned that this place needs a lot more than a 20-story hat to keep tourists’ attention; the place was a virtual ghost town, with maybe three other cars in the parking lot.  Much of the animal statuary from my childhood was gone, not that this should be a selling point to begin with.  The first building we entered was the arcade.  The sign promised “hundreds” of games; there were maybe twenty.  A few buildings were closed.  We entered a few different gift shops, all of which sold essentially the same stuff; we of course bought our obligatory fridge magnet and shot glass.  Some of the merchandise was quite off-the-wall, even for a place like this.

I’d also like to point out that even the signs have gone downhill.  Besides there being fewer of them, they are now much more boring.  I remember when I was a kid, they were over-the-top ridiculous, with terrible puns, gaudy colors, and often 3-D or used some other sort of prop.  In short, they were creative; they made you WANT to visit SotB.  The new signs just plain suck; they’re all black with ugly white lettering. I was going to do a side-by-side comparison, but I’m having trouble finding pictures of the older signs online.  I had a book of old SotB signs I bought as a kid; if I can find it, I will scan some pictures and post them.

There really wasn’t much to do, so we walked around for a bit and took some photos. 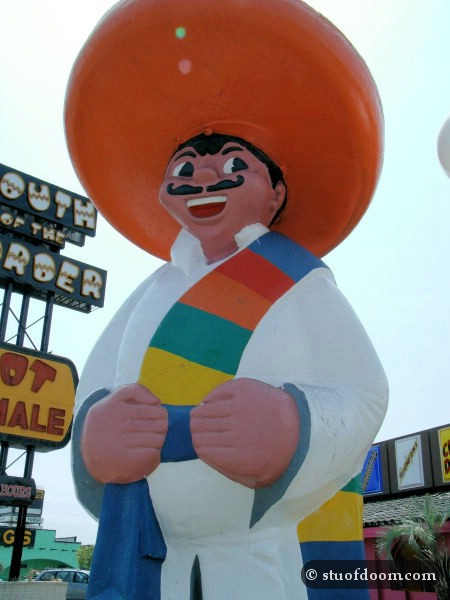 Ethnic stereotypes have never been so happy to see you! 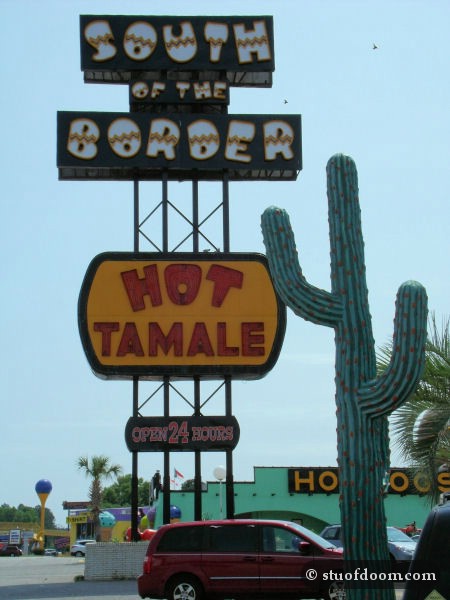 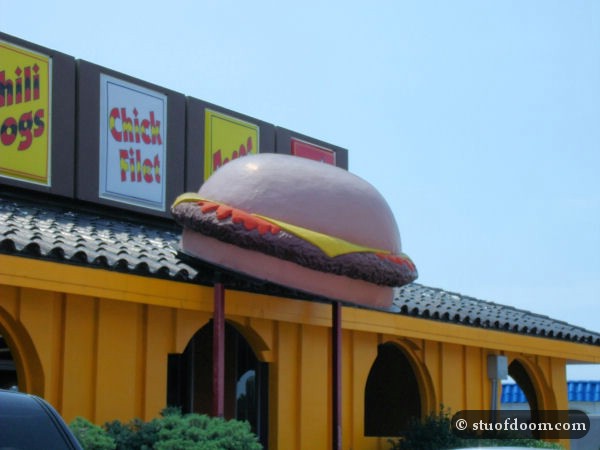 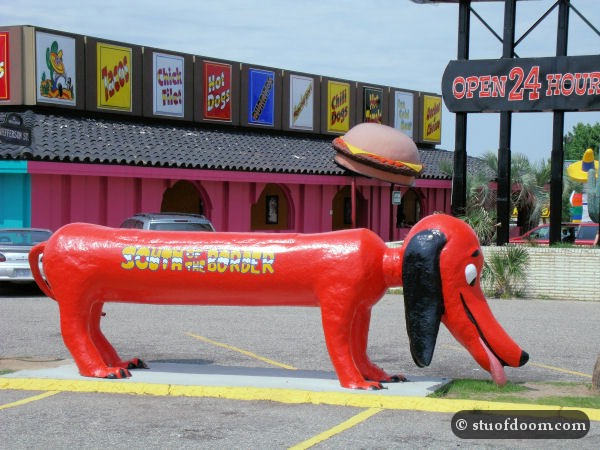 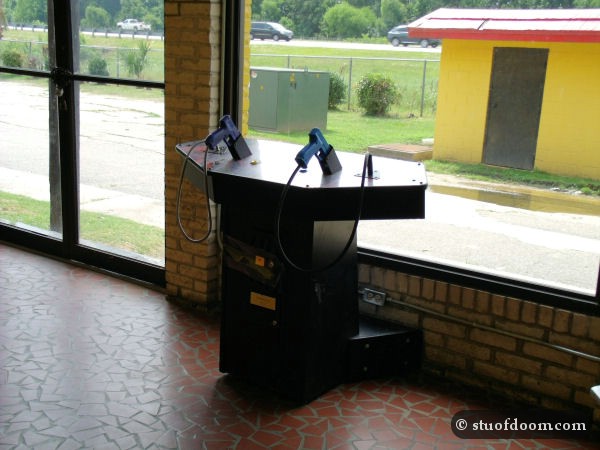 I love that game! 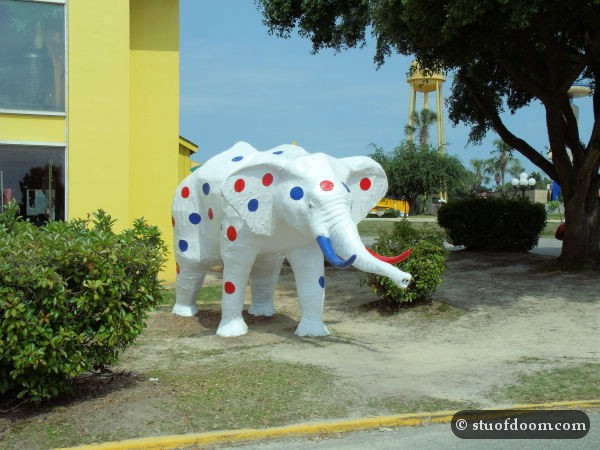 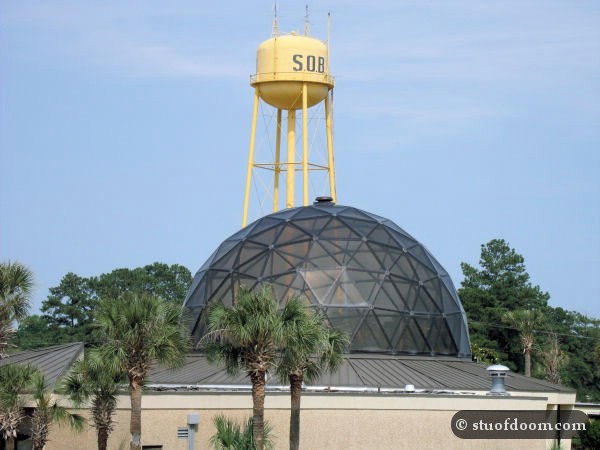 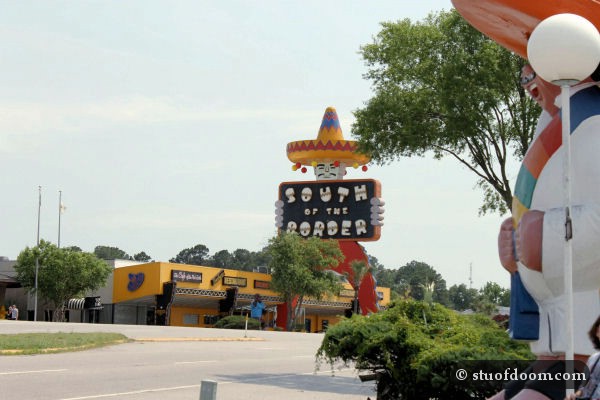 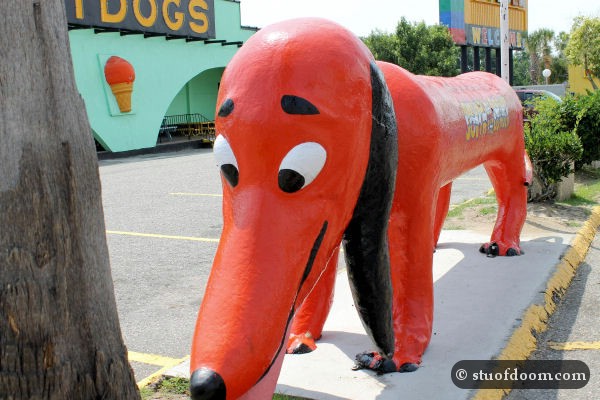 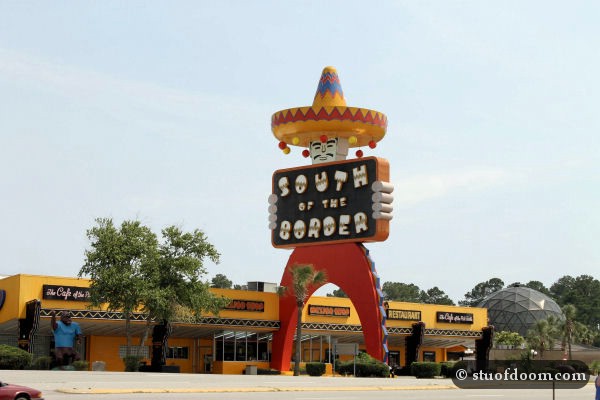 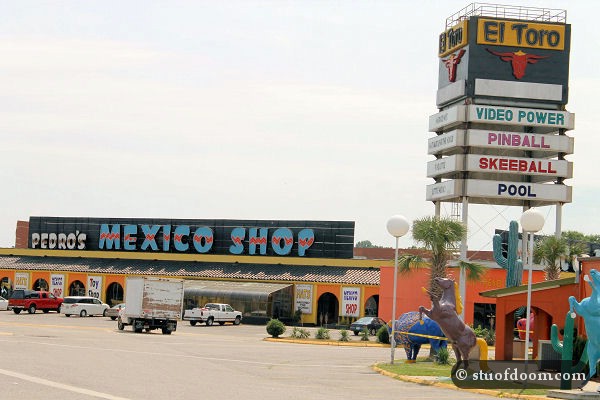 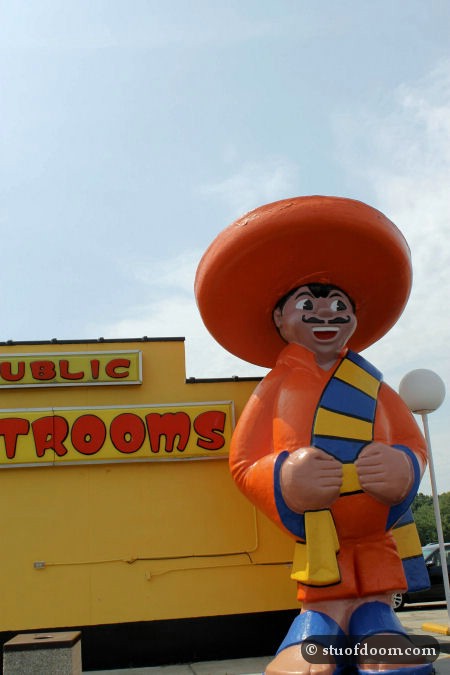 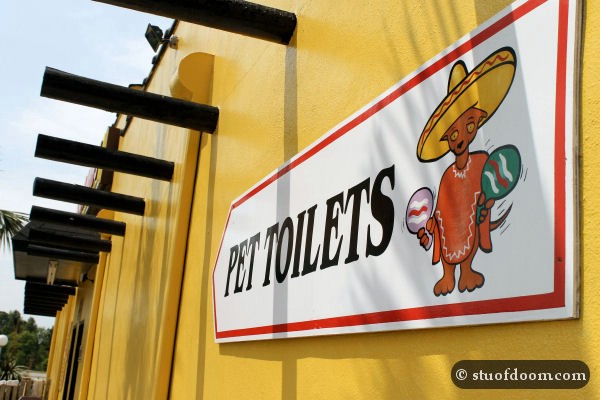 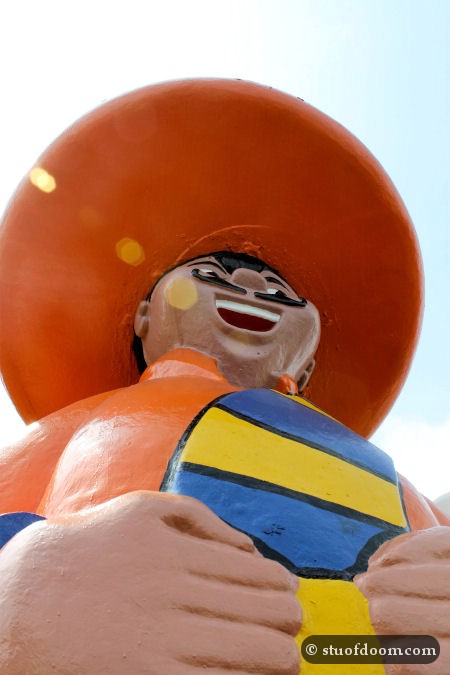 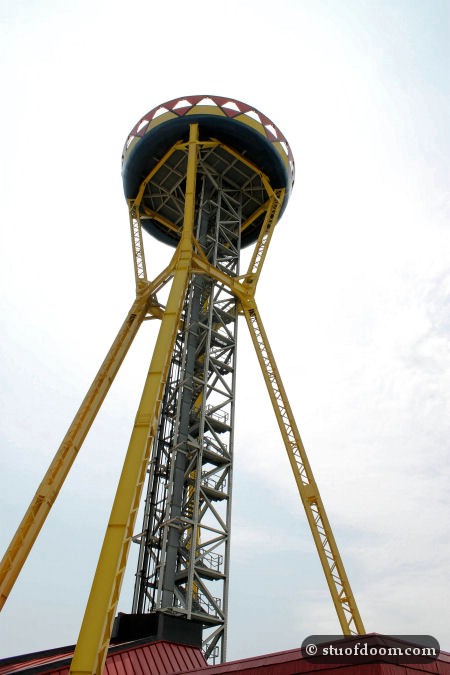 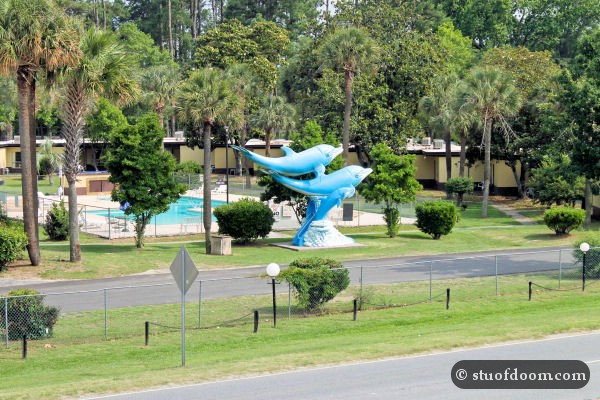 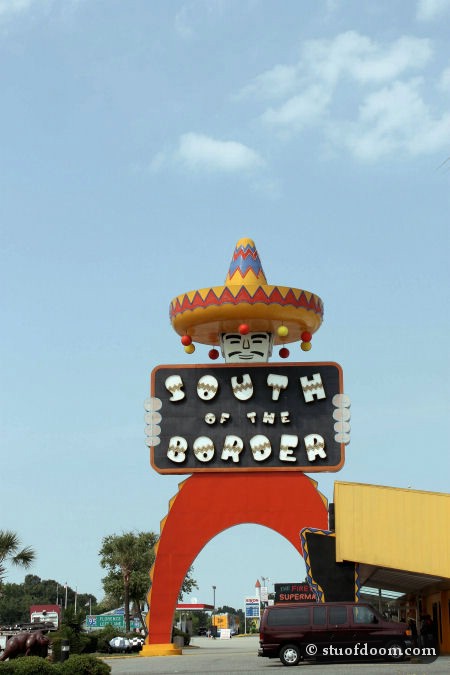 2 thoughts on “South of the Border”